Head of Regulation of Medicines and other Health Technologies, WHO 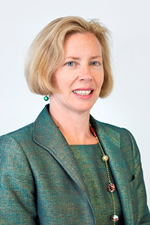 Biography:
In November 2016 Emer Cooke was appointed as Head of Regulation of Medicines and other Health Technologies with the World Health Organization (WHO) in Geneva. In this role, Ms Cooke is responsible for leading WHO's global work on regulation of health technologies (medicines, vaccines, diagnostics and devices), co-ordinating the regulatory teams (Norms and Standards, Prequalification, Regulatory Systems Strengthening, and Safety), and working with member states and international partners to assure the quality, safety and efficacy of appropriate health technologies.

During the period of 1985 to 1988 she worked in a number of positions within the Irish pharmaceutical industry before joining the Irish drug regulatory authority as a pharmaceutical assessor in 1988. In 1991 she joined EFPIA, the European pharmaceutical industry association as Manager of Scientific and Regulatory Affairs. In September 1998 she joined the Pharmaceuticals unit of the European Commission and in July 2002 she joined the European Medicines Agency as Head of Sector for Inspections. Towards the end of 2008, Emer was appointed to the post of newly created International Liaison Officer for EMEA. In July 2012 Emer Cooke was appointed Head of Sector of the International and European Co-operation Sector. In September 2013 her title was changed to Head of International Affairs in the context of EMA’s reorganisation.

World Health Organisation (WHO):
WHO’s goal is to build a better, healthier future for people all over the world. Working through offices in more than 150 countries, WHO staff work side by side with governments and other partners to ensure the highest attainable level of health for all people. WHO strives to combat diseases - infectious diseases like influenza and HIV and non-communicable ones like cancer and heart disease. WHO helps mothers and children survive and thrive so they can look forward to a healthy old age. The Organisation ensures the safety of the air people breathe, the food they eat, the water they drink - and the medicines and vaccines they need.